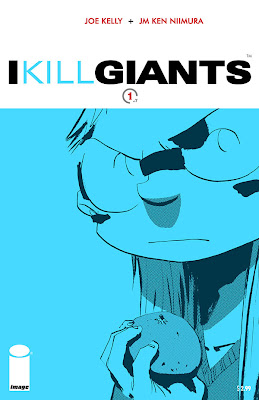 I Kill Giants is, without a doubt, one of the greatest books I’ve ever read.

Normally, I would have started a review like this with me being blunt about something obvious to my character, such as “I Hate Anime” or “Who would have thought I would read this?” No, this book is too damn good for me to make light of how important it actually is in countless ways.

I’m part of the Comic Book Discussion Club at Brave New Worlds and this was our book for the month. I would like to state now that I feel like a jerk for not mentioning them sooner and their monthly discussions, and that I only do it in the context of a review for the book to Joe Kelly. I was skeptical. I was not familiar with Joe Kelly, I didn’t think too highly of the title, and the fact that it was drawn in an Manga-Style didn’t help at all. The description? “It’s about a girl who kills giants.”

So I bought the book yesterday. I finished it today.

Barbara Thorson is a 5th grade girl who doesn’t fit into the world she’s surrounded by. She kills giants. She is an outcast in her school who wears bunny ears and holds a tiny handbag in the shape of a heart that she refuses to let anyone touch or see what’s inside. When I was younger, I knew someone like her. She was shy and quiet, and had her own personal world where, in the end, you were “lucky” enough to enter. She also wore an animal body part as if it was part her. I thought she was cool.

Reading about Barbara was amazing, and what Joe Kelly has done is something I’ve only seen one other time in my life, and that is write from the female perspective in such a powerful and impactful way. Not since Sam Keith, who has worked on The Maxx and My Inner Bimbo (among others) have I seen this done so well and masterfully. Seeing Barbara fumble through a school year that was incredbly tramatic and turbulant for her, making her first new friend and dealing with bullies on a level I couldn’t have imagined at her age… it was amazing!

At this point, I must warn you, there are spoilers ahead.

This book is not fantasy, nor is it easy to dismiss the “killing giants” as nothing more than a metaphore. When you read this book, you feel that Barbara is either intentionally delusional or is simply setting you up for a massive reveal where the fantasy is the reality. Without giving the ending away or too much, Kelly has used the Bill Watterson techquie where, really, you make the call.

When we see why she fights, when we learn that she was simply terrified of her mother dying of cancer and that she fights on to save her from this beast, this giant that wishes to take her away… its heart breaking.

The books ending is the most poinent moment in the series, and as Joe wrote himself, “After the storm, its always so calm and peaceful.” The final chapter is one of the most moving things I’ve ever read, as well as one of the most theraputic. When I was 19, my mother went into a coma because of a brain anyerusm. When I was 20, she died. The time in between was a year-long nightmare where I battled my own mosters and demons and, in the end, I didn’t get chance at the same resoultion by defeating my Titan that Barbara did.

In the end, the book is powerful and moving! The storytelling is dynamic, the art is compelling and drives you through the journey, and you finish each chapter hingry for the next! The amount of felling you develope for the main charachter in such a short span of time is amazing, since at first you can even feel her icy stare and disdain and soon begin to care for her.

Joe Kelly has written one of the definitive books of comics. I don’t read a lot of “superhero books”, and I find a lot of “alternative” and “indie” stuff too poor to peak my interest. This book, on its surface, may not seem like the book for you. In the end, it is one of the most surprising and amazing books I’ve ever read, and its much like I said, this is a definitive book in the world of comics in the way it deals with one of the most complex issues a person can deal with.

And Joe, if you ever read this… thank you. This book meant a lot to me.