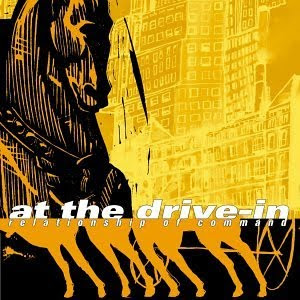 I posted not too long ago a rant about what I think is wrong with music today, and the how the very people who think they’re “helping” and actually destroying music.

Back in 2000, I was 15 and in my Junior year of High School. MTV2 had just launched and they were lauding a few bands, most notably Coldplay and also… At The Drive-In. Its odd, really, that BOTH these bands are to blame for the sorry, sad state of music today.

Case in point? How many lame, pathetic, pussy “rock” bands are there that sing about how lame and boring life is and how they “DEEP” they are when, in reality, the music they’re playing is not? Thank Coldplay!

But for this, I’m going to focus on At the Drive-In because they are a band I love to hate. I LOVE these guys, but I HATE that fucker Cedric Bixler-Zavala! Why? Why do I hate this guy to the point where I would love to punch him in the face? Because he is so far up his own ass, it would be nothing short of amazing if I could! The reason At the Drive-In broke up was because he wanted to go in a more “art rock” direction. The result was The Mars Voltra, a band that is every shitty indie rock band you’ve heard over the last decade.

But I’ll leave that for later.

At The Drive-In was a post-hardcore band that, by 2000, had reached its peak of success. By combining it with progressive and psychedelic rock, the result was an album that shocked everyone listening and was a much-needed alternative to the bubblegum pop and alt-rock of the time dominating airwaves. “Relationship of Command” was a bit challenging to listen to, and it made you feel like you were listening to the next big thing. I dare say, the next Nirvana.

For me, there was something daring about them that I was hearing anywhere else. I was getting into Megadeth and Metallica for the first time, digging Rancid and learning more and more about rock, metal, and punk. I didn’t buy the album until 2005, but “One-Armed Scissor” had something just incredible to it! I was hearing metal and punk merge in a really interesting way, as well as tinges of grunge and alt-rock. Plus, later on, I learned they got their name from the Poison song “Talk Dirty to Me“. Hey, they’re alright!

Listening to the album now may have some of the same effect, but over the decade, countless other indie kids and hipsters have taken the same cue and destroyed any and all uniqueness in the sound, and turned it into something I fucking hate. Derived, convoluted, boring, and easily re-created by just pretending to play and instead making “noise”. As self-important as this album made you feel, countless others insisted on doing the same, creating a whole genre of musis dominate the rock world where the idea was that YOU felt important about the music you were listening to, with the result being shitty album sales and only 5 people knowing of the band.

I’m left wondering what, exactly, would have happened if they stayed together in 2001? What if they released more music, and The Mars Voltra never existed? Other than being over-joyed at the thought, we get to go back to the man I hate and want to kick in the face: Cedric Bixler-Zavala.

Cedric is not like the others in the band. To his credit, I fully respect the fact that he has always stayed true to what he wants to do, and that he was not willing to compromise on his vision and settle for less. I fully respect him for that! But in return… he’s gone up his own ass in self-importance, which is fine in and of itself, but he’s taken most of the music world with him. For that, he must pay! Ranting aside, let me get to my point: He was not like the others.

If Cedric stayed in the band, he may have turned it into The Mars Voltra, anyway, but I doubt it would be as potent. People would have said they sold-out, caved into the hype and pressures they were facing, and we may have seen them call it quits mid-decade instead. Would modern rock be better? Who knows.