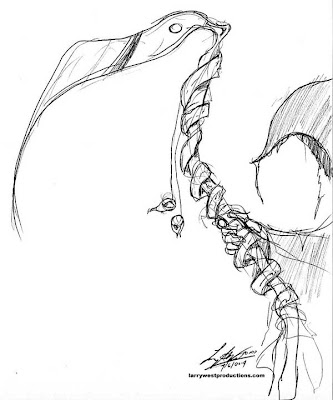 The following is a short story. Is it based on real events or pure fiction? I’ll leave that to you to decide. Its the first in a series that I hope to collect into a short book.

It was the simplest of greetings, an introduction done more times than anyone can recall to more people at more moments throughout their lives than they could recall unless they were allowed to view their life again and keep score. There are few times in your life where you will remember it longer than you can recall, but this I will remember until the day I die.

“Hello. I think its time for a talk.”

Its not everyday that you actually meet the Grim Reaper of Death, and even rarer that you live to tell the tale.

I write this in sheer terror of my life. I don’t recall if there were any stipulations on this talk, if there were rules as to what to divulge afterward… if, by simply conveying these thoughts on paper, I forfeit my life. To, me, though… this, this is an opportunity you are rarely awarded. I do not know. I claim ignorance to my host that night if I may have done wrong, for in the realms of which I was in, one only remembers few details and embellishes the rest.

The man with the scythe greeted me, and unto him I was his guest. We began to speak of things that one, I imagine, would speak of when looking into the face of the abyss, of the land we all go to one day.

We spoke of existence and its very nature.

“Time is an illusion. This much, I am sure, you are quite aware of. Time is nothing more than what mankind has made it, a series of checks and balances of what is to be and what will be. No, not even that, how foolish of me to even say that! No, mankind makes dates and time not to create checks and balances, but simply to count the time he had and what he may have left. Calendars and time pieces chronicle his achievements, allowing him to neatly keep track of all he has done. Man chooses to believe in the illusion that he is, in turn, the master of his own destiny, that he can choose when the sun rises and when nations will fall and crumble.

“But, in the end… it is, of course, nothing but an illusion.”

“But Death, “ I said, daring to interrupt him, “I we both know I know of this. In turn, I’ve learned that to simply relish ones life, and the time he has, albeit short, nothing more than the blink of an eye in the history and grand tale of the universe, one must make his time count, to matter, to make an impact! If he doesn’t… then, well, what’s the point?”

Death was glad to see my response.

He then took me to a room. In it, a wall was covered with TV’s, all of which were off. As we sat down, the TV’s came on all at once, showing the Earth. “Tell me… tell me what you know of the future of your world?”

“I know of the end. I don’t know the end of my species, but I do know that, in time, the Earth will die. The sun it circles around will slowly die and destroy the solar system. I know that even if the human race were to survive, if they were able to keep going, it wouldn’t matter. The entire universe would, in time, simply condense, continuing onward to where everything that has ever existed becomes nothing more than a dot. Existence, even the afterlife, is gone and eliminated.”

Death looked blankly back at the screens on the wall. “Do you believe it to be meaningless?”

I didn’t know how to respond. I had said it was… but did I even believe it? “At one time… no, I didn’t. I knew of the end of the universe, I knew that in the end, all the triumphs of mankind were for nothing. Yet, I was OK with it. It was the afterlife that gave me solace. That, while the physical world would be gone and forgotten, existence was meaningful if you still got to exist in an afterlife and, who knows, possibly help shape a new universe.”

“So, what changed? Why do you now believe that even that would be gone?”

“After time… it just made sense to simply have everything condense into one spot… even the afterlife.”

“Look at the screens.”

On the screen was exactly what I had said, of the Earth dying with the Sun, of the black hole swallowing the solar system, and how the universe decayed as it was sucked into nothing more than nothingness.

“A man once wrote that, ‘Stranger eons, even Death may die.’ No… I will not die, but everything else in existence will. It will be sucked into a point, and you will not exist. You will be nothing. You will be as if you, nor the whole of humanity, existed.”

“So life IS meaningless? There is no point in living?”

Death turned to me. Part of me felt chilled, but the chill melted as quick as it came. “No. There is a meaning to existence. Tell me what you see.”

I turned to the screen once more and I saw bright pink. It was stunning. It was one of the most vibrant shades I had seen in my life. It was bright and cheery, even more so against all the darkness I had witnesses up to this point. It soon zoomed out, showing itself to be an abstract shape among other shapes. Soon, the screen was a barrage of images of life. I saw birthday parties and people having fun, of bright sunny days in the park and great works of art. Of how humanity had evolved from a primordial ooze and into the dominant life form on Earth. Countless eras and places flashed before my eyes, yet I was not overwhelmed. I saw beautiful women make love and I saw plants bloom.

“Mankind, “ said Death, “Mankind is not the meaning of existence, nor is it a means to an end. Yet, within this solar system, within this universe, it has had moments that others have only dream of. It is a species of vast intelligence and design. It is a species that has reached out to the star and touched them, and has dared to dream, dared to question, and most importantly, dated to exist.

“Existence is pointless, yet it is not meaningless. These images prove otherwise, and your own existence proves it.”

“Are you saying, to put it simply, that existence is nothing more than what I make it? That since even reality itself is relative… that my life is, truly, in my own hands?”

We sat their, silently, watching the screens. Then I saw my life. I saw my birth, my first days in school, and of my first love. I saw my parents grow old and die, and I saw myself enjoying life.

“Death… I am afraid to ask this question, as I’m sure you have been awaiting for me to ask it.”

My heart skipped a beat, and I was relieved to hear the news. Death held his scythe in his bonny hand, not moving it at all during the entire conversation. It was wrapped with a long, torn, and old wrapper, as if to protect his hands. It was coming off, slowly but surly, thanks to old age.

“I decided it was best to just show you this now. For you see… you will die, soon.”

Terror gripped me once more, as I quickly found my nerve to even ask a question afterwards. “If I may… WHEN, exactly… am I to meet you again?”

He gave me the time in as cryptic a way possible, giving not a date or time, but a matter of hours for me to puzzle with in my head. To himself he chuckled as I frantically tried to remember the number and figure out just what it meant. “I could be lying, of course,” he said rather amused. “Also, recall I did give you a big, round number. Isn’t that rather convenient? Although, I am sure that once you come to your own conclusion as to when, exactly, you are to meet me again, you will realize that it isn’t exactly as big and round a number as I said. Nor do I honestly think you’ll remember the number correctly, what the number referred to, and what, in the end, is the actual result.”

Yet, I wasn’t angry. I was not mad at knowing, or at least seeming to know, when I was to die. Yet, like anyone or anything told when they are supposed to die, I asked the question he already expected; “Why tell me this?” “You tell me.” To Death’s credit, he didn’t underestimate my intelligence.

“As you will learn to a higher caliber soon enough.”

It was then that Death and I began to walk and discuss my life. We spoke of nothing of consequence to you nor my friends. I asked him nothing of the past but of love and relationships, of the world at large, and he took a liking to my view. Yet in this world we came across my friends who looked upon me and not of Death. When I spoke to them of my conversation, they simply said that they were visited that night too, yet did not believe what they heard. “Death lies! He trick you! He speaks not the truth about your life and existence, only manipulates you into doing what he wants!” I did not argue, and simply would agree and move on.

“You’ll be happy to know that it will be a natural death.” With that, he left.

It did not help to wake-up sick this morning…